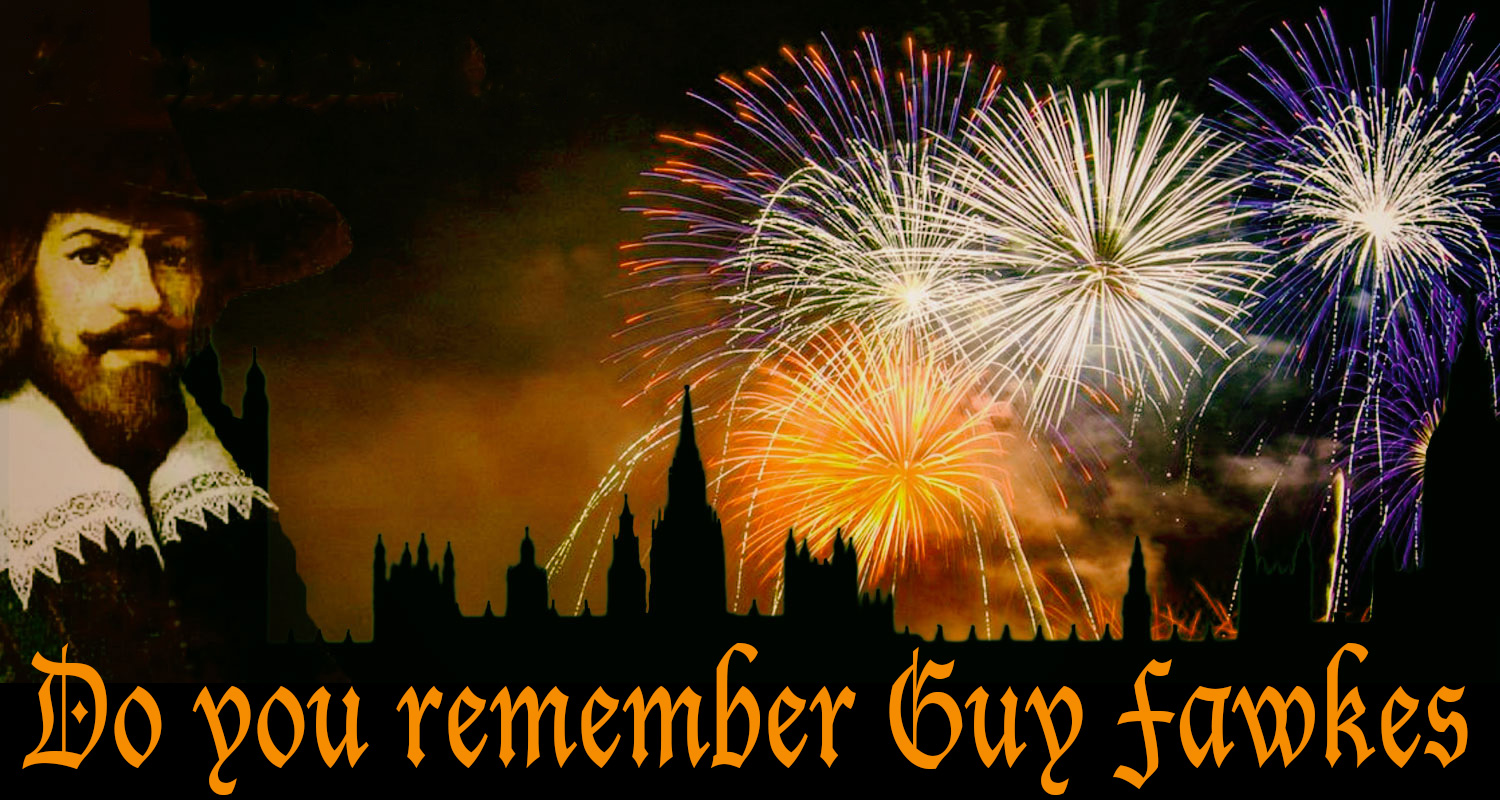 Do you Remember Guy Fawkes

Do you Remember Guy Fawkes. We’re again approaching that time of the year. “Bonfire night”, it was on this day back in 1605 that the name “Guy Fawkes” would become known and infamous throughout the British Empire and the world.

The period at the time

When looking at the history of this time, one must understand that religion played a very important role. The main forms of religion were Catholicism and Protestantism. The specific time of interest here saw a Protestant King and they were the ruling faith.

Guy Fawkes wasn’t acting alone on this infamous day of November 5th. He was one of a group of Catholic conspirators who were attempting to overthrow the then Protestant King, King James 1, and to remove the then sitting government. Just how were they going to achieve this monumental feat you might ask? Well their plan consisted of blowing up and burning the House of Lords while the above persons of government were in attendance.

The conspirators hoped, that once the deed was done, it would ignite a general uprising amongst the people of the land. Thus gaining their desired results, in establishing a new government of the right faith.

Didn’t quite workout as they wished, Guy Fawkes – Gunpowder Plot

Guy Fawkes was found lurking in the cellar of the parliament-building by Sir Thomas Knyvet. (Was there a tip off ???, it is not known) Sir Knyvet, an acting justice of the peace, had Guy detained and had the area were he was found searched. What was found was nearly 2 tons of gunpowder strategically hidden under the building. During Guy’s interrogation, Knyvet found that “Guy” was a participant in an English Catholic conspiracy plot, one that was organized by a Robert Catesby, the plots goal was to kill England’s entire Protestant government, including the King himself who was to be in attendance that November 5th.

Over the months after Guy Fawkes arrest the authorities at the time managed to capture or kill all of the other known conspirators in the now infamous “Gunpowder Plot”. Apparently they also arrested, tortured or killed many innocent Catholics for good measure also.

The trials of those arrested took place quickly and Guy Fawkes was sentenced to be hung, drawn and quartered. The date for “Guy’s” execution was set for the 31st January 1606 and was to be open to the public. On the said date “Guy” was brought out to meet the hangman, in what seems to be a finial act of defiance, “Guy” while climbing the ladder to the gallows, jumped from the ladder breaking his own neck, in doing so he died instantly this evading the public execution and mutilation.

In recognition of the foiled plot the English parliament passed the Thanksgiving Act in January 1606, this act established the annual celebration each January 5th. Initially the date was to be marked by sermons and prayers in church. In time however these church procedures started to wain, giving way to festivities more like what we see today. Bonfires, Bell ringing and fireworks grew in popularity and it is these that we still see today.

While fireworks and bonfires are certainly the brightest and most spectacular way in which the 5thof November is remembered, there are other traditions associated with this date.

Effigies of Guy Fawkes can still be seen to this day. You can still see him paraded through the streets, making its way to the bonfire and it’s burning.

Roasted marshmallows, Treacle toffee and Perkin cake are some of the treats associated with this time. They are extra tasty around the bonfire.

We do wish you a happy Novenber 5th, we hope you enjoy the bonfires and fireworks. Be safe, follow guidelines and have a wonderful time. Celebrate this 400 year plus English tradition of an event that could of changed our history.

The images on this blog are under Fair Use:

The images on this blog are under Fair Use:

Copyright Disclaimer Under Section 107 of the Copyright Act in 1976; Allowance is made for “Fair Use” for purposes such as criticism, comment, news reporting, teaching, scholarship, and research

Fair use is a use permitted by copyright statue that might otherwise be infringing. Non-profit, education or personal use tips the balance in favor of fair use.

All rights and credit go directly to its rightful owners. No copyright infringement intended.

Our large selection of fireworks can be seen below

Sign up for our newsletter if you would like to be informed of upcoming information and specials.

Remember remember the 5th of November

We use cookies on our website to give you the most relevant experience by remembering your preferences and repeat visits. By clicking “Accept All”, you consent to the use of ALL the cookies. However, you may visit "Cookie Settings" to provide a controlled consent.
Cookie SettingsAccept All
Manage consent

This website uses cookies to improve your experience while you navigate through the website. Out of these cookies, the cookies that are categorized as necessary are stored on your browser as they are essential for the working of basic functionalities of the website. We also use third-party cookies that help us analyze and understand how you use this website. These cookies will be stored in your browser only with your consent. You also have the option to opt-out of these cookies. But opting out of some of these cookies may have an effect on your browsing experience.
Necessary Always Enabled
Necessary cookies are absolutely essential for the website to function properly. This category only includes cookies that ensures basic functionalities and security features of the website. These cookies do not store any personal information.
Non-necessary
Any cookies that may not be particularly necessary for the website to function and is used specifically to collect user personal data via analytics, ads, other embedded contents are termed as non-necessary cookies. It is mandatory to procure user consent prior to running these cookies on your website.
SAVE & ACCEPT